The California Sea Lion is the one most people are familiar with. They are friendly animals often seen doing a variety of tricks in various locations while in captivity. Males end up being much larger than the females. When they are younger though you can tell them apart because the males develop a bump on the crest of their head and the females don’t.

The males can be about 800 pound when they are full grown while females will only be about 230 pounds. There isn’t too much difference when it comes to their length though. The average for males is 7 feet and females end up being about 6 feet long.

These Sea Lions prefer the warmer climates of both California and Mexico. They are found from the Pacific Coast of Vancouver all the way to Baja which is where California meets Mexico. Until the 1950’s there were also California Sea Lions along the coast of Japan called Japanese Sea Lion, subspecies of California sea lion.

All species of Sea Lions are very social, but the California Sea Lions seem to be even more so. They can become a very noisy group with such large numbers of them hanging out in one location. They will pack in close together even though they have plenty of other room to spread out if they wanted to.

They are known to be the most intelligent of all Sea Lions in the world. This why they are the ones trained for entertainment as well as for the needs of the United States Navy. They are often called upon to help with tasks that have to be completed under the water.

They are very flexible due to the design of their bodies. If you are watching California Sea Lions you may be able to watch them bend over so far that their noses touch the tip of the back flippers. This is an amazing thing to watch if you get the chance. 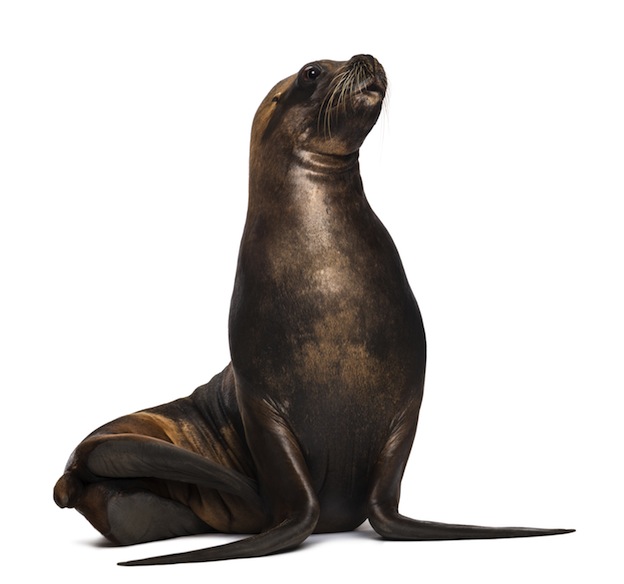 Like other Sea Lions they only feed on meat items found in the ocean. They aren’t picky about what they consume because they like to eat large amounts each day. There is plenty to pick from in this region for them though. Some of the foods they will consume include herring, hake, squid, octopus, rock fish, smelt, and lampreys.

California Sea Lions breed during June and July on land. The males will find areas that they can call their own domain. Then they use calls and loud barks to encourage many females to join them. They will protect those females from other males so they can become extremely aggressive during this time of the year.

The pups from the last breeding season are born while they are in these harems in either June or July. They will nurse for about six months. During this time period delayed impregnation takes place. That way the females are pregnant before the males leave. However, the embryo won’t attach to the placenta for a couple of months.

Even though the California Sea Lion isn’t considered to be in danger at this time, there are efforts in place to protect them. California laws are in place to try to reduce the number of them that are injured or killed in boating accidents. They also strive to keep the waters clean and to make sure humans aren’t intentionally harming them.

Since these Sea Lions are so calm they allow researchers to find out more about them. This has been very helpful when it comes to finding out overall behaviors and characteristics so that other species of Sea Lions can be helped. For the most part the interactions they have with humans have been very good. Many people are in awe of how well they are able to learn new things.