Most of us can’t help but to be fascinated by the Sea Lion. After all they have a unique look and design to them that is hard to miss. Learning some basic facts about them can help you to understand more about them. For example the Seal Lion is very often confused with Seals.

The Sea Lion is considered to be a pinniped which means that it features a winged foot.  They are also classified as marine mammals.

The males are called bulls and the females are called cows. Their offspring are called pups. A large group of Sea Lions is referred to as a colony or pod. There can be thousands of them that reside within a colony, with many subgroups inside of it. They love to live in very close groups even though they often have plenty of room to spread out more.

A Sea Lion is able to dive up to 600 feet for food in the water. They can remain under the water for up to 40 minutes before they must surface for air. This is accomplished by closing their nostrils together instinctively as they enter the water. They will remain closed until they need to take a breath.

They can swim at up to 25 miles per hour which most people don’t realize. Generally they only move about 10 miles per hour unless they feel threatened.

Sea Lions may appear lazy but they simply enjoy relaxing and basking in the sun. 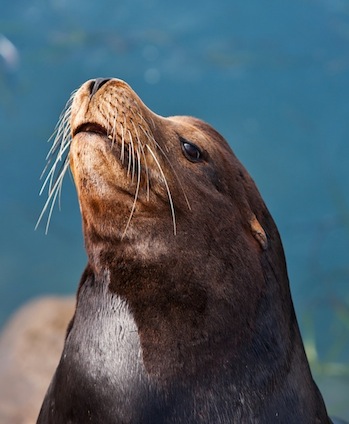 There are many stories out there about seeing Sea Lions crying. What is actually taking place is that they have tear ducts to help remove the salt water from their eyes.

They do have decent eyesight but it is believed that they are nearsighted. There is evidence to indicate that Sea Lions can see better in the water than they can on land.

The average life span in the wild for a Sea Lion is 20 years. In captivity they live an average of 30 years.

Sea Lions often suffer from an array of health problems associated with humans. They include pneumonia, epilepsy, and various types of cancers. Research shows that the pups are immune to such problems as long as they are fed milk from their mothers. Those that are in captivity from an early age may develop these problems in the first year and the only difference is the milk they are given.

Plastic is a huge threat to Sea Lions when it is found in the water. Something that may seem safe to you such as plastic rings from a six pack of soda can be deadly for them. They will swallow the plastic and then have problems internally with the digestion process.

Female Sea Lions are pregnant when they come to shore to mate again. They will become part of a harem with a male that protects them. They will give birth and then mate again for the next season within a couple weeks.

The gestation period for a female to carry a pup is from 8 to 11 months. The pups are born on land and can weigh up to 50 pounds at birth. They can be 200 pounds and six feet long by the time they are a year old.

Males are very large and can weight from 1,500 pounds to 1 ton in exceptional cases. They can also be up to 11 feet long. Females are much smaller with a weight of 700 pounds and average about 9 feet in length.