The Galapagos Fur Seal is medium in size compared with other species. They are a dark brown to light gray color. You can tell the males and females apart as the males are much larger.

These fur seals are only found on the Galapagos Islands, which is where their name stems from. If you aren’t familiar with the location, it is a group of islands around Ecuador. They don’t migrate anywhere else, but they do move down the shore to the breeding area that has been established for them.

You will find that the Galapagos Fur Seal is one species that spends more time on the land than any other. They still spend about 50% of their time in the land and the other half in water. They prefer to lay on the rocks than on the sandy areas. It is believed that these rocks help them to cool down their body temperature while on the land.

Research has shown that the Galapagos Fur Seal actually sweats if it gets to hot. It has to work very hard to cool its body temperature down. It is believed that the mothers teach this process to their pups at a very early age. This process is called Thermoregulation and it works by controlling the flow of blood to the flippers. More is sent to them when they are warm and it is pushed away when they are cold. 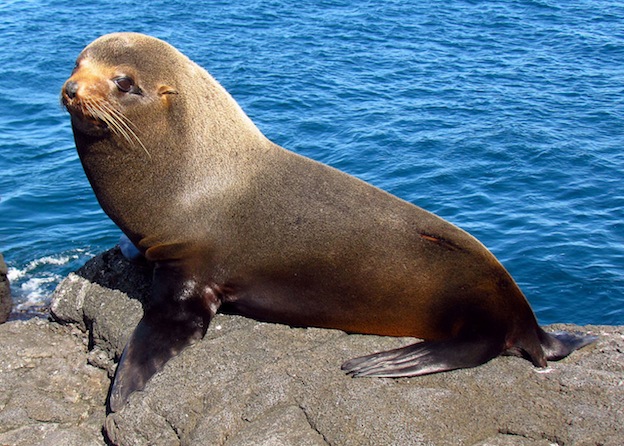 Since these seals love to get as much sun as possible, they do their feeding at night after the sun goes down. The moon cycles seem to have a huge impact on their feeding habits as well. They tend to feed less during the full moon cycle.

It isn’t uncommon for them to spend up to six days in the water and then one full day on land. The males are extremely protective of their land territory though. They won’t leave it until they absolutely have to go in search of food. They tend to consume fish that are very close to the shore lines.

The males are extremely dominate over their area when it comes to reproduction. They can have a group of females from a couple to more than fifteen. The males arrive at the breeding grounds first in order to take their place among the other males. Not all of them will get to mate, only the biggest and the strongest.

When the females arrive they will give birth to the pups they are already carrying. After only a couple of days they begin to mate again. The eggs aren’t immediately fertilized though. Instead what is known as delayed implantation occurs which means that it will take several months before the uterus attaches to it.

This species of seal spends more time with the pups than any other. This is because they nurse for a longer period of time. They will leave the pup to go feed themselves and then come back while many others end up staying with their pup as long as they can and then going to eat.

There are currently about 40,000 remaining Galapagos Fur Seals out there. The number of them was severely reduced in the early 1980’s due to an El Nino.Today is estimated to be around 15,000 of them. In the past there have been plenty of conservation efforts in place. Many of them involved eliminating the use of fishing nets in the areas where they live. That has helped to reduce accidental injury and death of this species of seal. The average life span of a Galapagos Fur Seal is about 22 years.