The Galapagos Sea Lion is very large, with the males being about 900 pounds when they are full grown. The females average about 244 pounds at maturity. Both of them feature very thick necks but the males also have a thickness in the chest and shoulder regions as well. Females tend to be longer and more slender in form than the males. The males also have a crest that forms on the top of their heads. One physical characteristic that is different from other species is their long pointy nose.

When they aren’t in the water they can be found on the sandy shores or rocky areas that connect to the waters. They are fun to watch because they have such a playful nature to them. They are very social and the sound you will heard from them the most is similar to the barking from a dog.

There are large sub groups of bachelor males out there as well. These are the ones that aren’t strong enough to maintain an area of their own to attract females to mate with. The males are very curious which is part of the reason they may be struck by boats or get caught in fishing nets.

They eat a variety of different kinds of fish found in the water. There seems to always be enough of it to go around as well. The males are known to attack pups as well but it is due to them defending the area more than it is to fulfill their need for food. These are large Sea Lions so they consume a large amount of food each day.

They tend to hunt for food within a few miles of the shore. However, they have been known to go further out when they need to. The further from the shore that they are the more likely it is that they will end up being eaten by Killer Sharks and Whales.

Fishermen in the area do tend to get upset over the amount of fish that these animals consume. They feel it makes it harder for them to get enough to make a decent living from. However, researchers don’t believe that the Galapagos Sea Lion is able to consume enough to be a huge problem for fishermen in the area. 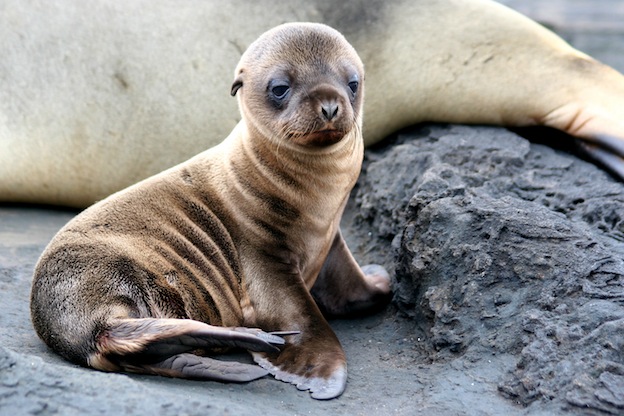 The males are always very competitive with each other, but even more so during the mating season. They will take presence over an area and fight other bulls to keep it. Then when the females arrive they will create harems with five to twenty females in it. They will breed with each of them. They will also protect them but can be aggressive towards the pups.

These young pups are born soon after the females arrive to mate. Then they will mate again with the new male they are with about two weeks later. The mating season runs from May until January which is a very long breeding period compared to the other species of Sea Lions out there.

The number of Galapagos Sea Lions out there is about 50,000.  Even so, they are very heavily protected.  One of the biggest threats to the Galapagos Sea Lions is due to El Nino. It can result in large numbers of them being killed, the females may not want to mate, or they will abandon their offspring.

The islands where they live are very common tourist attractions. They offer a great place to observe these animals in their natural habitat. The safety of the Sea Lions is always a priority though. Any visitors that violate the guidelines can be arrested or required to pay fines.