The only way you will get to see a Japanese Sea Lion is in books, pictures, or online. They no longer exist which is very sad to say. There are some museums out there in Japan that feature stuffed versions or skulls of them that you can view as well.

The males weighted close to 1,240 pounds and were approximately 8.5 feet long. They ranged in color from a very light gray to a very dark shade of it.

The Japanese Sea Lion used to call home the waters around Japan and Korea.

While most Sea Lions spend their time either in the water or on land and ice so they can get sunlight, this one was different. Other than when they were breeding their time on land was spent in caves. It isn’t understood why they did this and now we will never have the chance to study them further to find out.

The diet for this species of Sea Lions consisted of various fish found in the waters in their habitat.

Reproduction for the Japanese Sea Lions took place both on sandy beaches and sometimes in rocky areas. 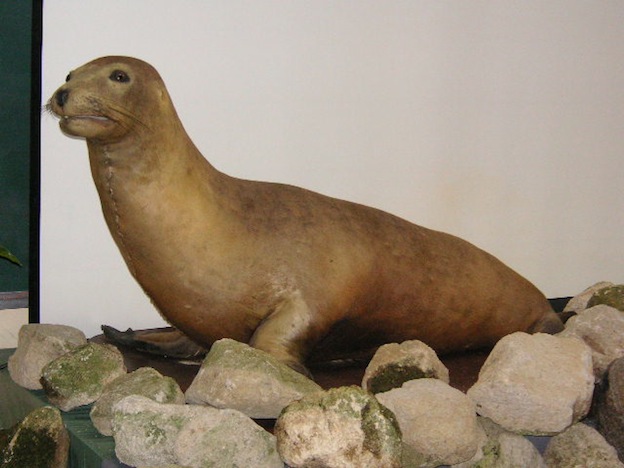 Unfortunately the conservation efforts for the Japanese Sea Lion came too late to help them to survive. However, the information collected definitely has helped with the efforts for making sure the remaining species of Sea Lions do survive. Some of them are still vulnerable but hopefully with the continued efforts and education they will be able to increase their numbers.

A huge effort was made in 2007 to search for any remaining Japanese Sea Lions. Some researchers thought they had seen some and that was exciting news. However, they turned out to be California Sea Lions. There are talks of moving some of these species into the habitat that the Japanese Sea Lions once called their own.

However, before various governments will agree to this they want to find out more about why the Japanese Sea Lions weren’t able to survive. They are afraid that the same problems can affect these newly introduced species if that information isn’t fully known first.

There are quite a few factors that lead to the extinction of the Japanese Sea Lions. It is a myth that they were widely hunted for food. In fact, there are plenty of written documents from the 18th Century and after to indicate the meat from them had a terrible taste to it.

They weren’t consumed for food unless there was no other alternative. They were killed though to allow fishermen more access to the fish in the waters. The blubber from them was also used to make oil.

The internal organs were used to make a variety of medicines for the people. The leather was used to create a variety of clothing and shoes as well as blankets. They also used the whiskers to make pipe cleaners. The only known predators of the Japanese Sea Lion were humans.