You will only find the New Zealand Sea Lion around this area. They are mainly found around South Island and the Auckland Islands. There are smaller groups of them spread out in other areas but not very many. They tend to move into these larger groups.

On land you will find the New Zealand Sea Lions gathering on the sandy beaches. Many sub groups form, especially of mothers with their young pups. This way they have a better chance of protecting them.

The New Zealand Sea Lion doesn’t mess around when it comes to eating. They are opportunistic so they will take what they can find without thinking twice about consuming it. What they commonly find in their natural habitat includes squid, octopus, crab, crayfish, and any other type of fish that happen to be in season there. 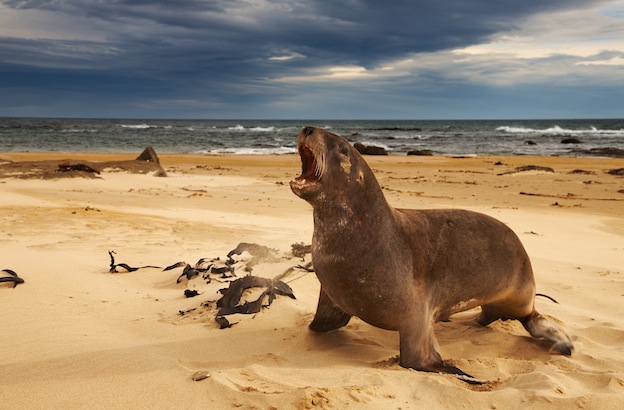 Breeding takes place from November until January. The bulls arrive at their given locations in November. They may have to fight with several other bulls to stake their claim to that location. When the females arrive later on those disputes have already been settled. The males use vocalizing to get as many females to become a part of their harem as possible. Some of the males are very aggressive and they actually force the females going by to stay there.

With a few days of arriving at the breeding grounds the females with give birth to their offspring from the previous season. Then within 10 days then will again breed. The mothers keep the pups on land until they are about three weeks of age. While they will continue to consume milk from her, they will also be introduced to the basics of hunting. She will nurse them for about 8 months and then they are on their own for survival.

The males will injure or kill the young pups that they feel can be a threat to them. This is a big concern because it increases the mortality rate for this species of Sea Lions. Both males and females have an average life span of approximately 23 years.

There have been efforts in place to protect the New Zealand Sea Lion since 1890. Even so the numbers of them remaining is still very low. A count in the mid 1990’s showed that there were about 15,000 of them. Another count in 2000 though showed that there were only about 13,000 of them. This is believed to be due to an outbreak of disease though that occurred in 1998.
Human interaction

In fact they allowed up to 124 of the Sea Lions to be captured and killed annually beginning in 2004. Most of the time it is done by fishermen that don’t want the hassle of these animals in their nets. They also know they can yield a more profitable catch if the Sea Lions aren’t feeding on the fish in the waters. In 2009 this amount was reduced to 113 but conservation groups continue to pursue the cause of getting that number further reduced.