There are some features of the Northern Fur Seal that make them simple enough to tell apart from other types of seals. They have very short heads with a mouth that is curved in shape. They also feature a very small nose and very thick fur.

There are several different locations where you will find the North Fur Seal living. They include The Northern portion of the Pacific Ocean, The Bering Sea, and the Sea of Okhotsk. In some areas the habitat region of the Northern Fur Seal overlaps that of the Steller Sea Lion. They are able to reside in harmony like that and can even be found living among each other instead of segregated.

When it comes to food, the Northern Fur Seal isn’t very picky at all. They take advantage of what they find in the water around them. What they will have access to can depend on the location where they live and the time of year it is. Some of their selections include Anchovy, Herring, and Pollock.

These seals don’t dive deep to find food so they know not to pass up what comes their way. Generally the current is able to bring plenty of food close to the shoreline for them to benefit from. When there is a lack of food they may move down the shoreline to a new area in order to continue having enough to consume. 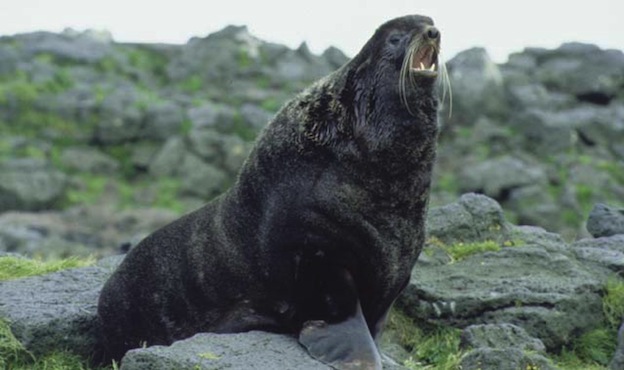 The Northern Fur Seal has certain locations called rookeries where they will do their breeding activities. The males are the first to arrive there so that they can complete their territorial battles. Generally males less than 10 years old won’t be strong enough to win the right to mate.

The females come along soon after and they are ready to give birth to the pups they carry at that time. They will remain with their new pup for about 10 days and then go for their own food and return about a week later. The pups have milk that is very fat so they are able to live off of it until their mother returns. This process continues for about a month.

After that the female is going to be carrying a new embryo but one that won’t attach to the uterus for a couple of months. This way she will be ready to have her pup again when the next mating season rolls around.

More than half of all of the pups in this species of seals doesn’t make it. They are often left alone at a very young age so that their mother’s can search for food. This makes them very susceptible to the dangers of land animals and other problems.

Concerns have been in place since the late 1970’s about the number of Northern Fur Seals out there. They are currently listed as being vulnerable which is a couple of steps on the list below being endangered. Many animal rights groups continue to strive to find ways to help increase the number of them out there.