Male Sea Lions are mature about at about 6 years of age. However, in most instances they won’t end up mating until they are at least 10 years old. This is because they have to be strong enough to be able to stand their ground against other males and to attract females. The females will begin to mate when they are about 3 years old. They will look for the strongest males to be with.

The males compete fiercely for the right to reproduce with the females. They males strive to form a harem that will consist of as many females as possible for him to breed with. It isn’t unusually for them to have 10 to 30 females. It is also the job of this male to protect all of the females in his harem from harm.

The males go to shore around May to stake out the land and to make their claims. The females will come to the shore a couple of weeks later. It is important to note that the females will already be pregnant at this time with the pups from the previous mating season.

When it is time for the mating season to start the males will start to bark more aggressively than in the past. This type of communication is a way for them to attract females to them. They also use these barks to intimidate other male Sea Lions that happen to be in the area. They want to make it know that they have staked their claim to a certain area as well to the females found there.

Females give live birth to the pups on land. Generally only one pup will be born at a time but occasionally there will be twins. The pups immediately start to consume milk from their mother’s body. This milk contains more than 50% of nutrients which helps them to grow at a very fast rate. This is also responsible for helping the young Sea Lions to develop the layers of fat called blubber that they need to stay warm. 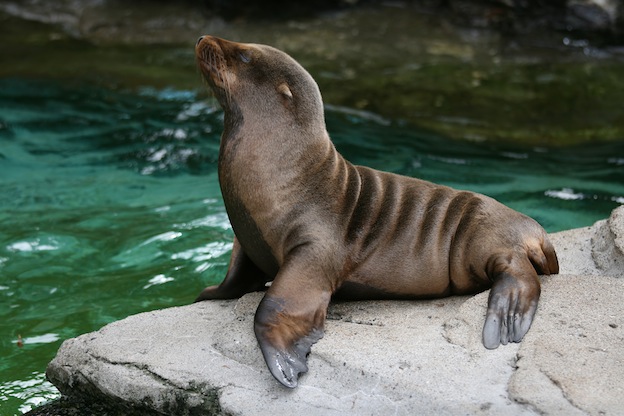 These layers of fat need to start forming before the young pups will be able to survive in the water. When they are born they do feature a coat of hair that does protect them from the cold until they develop enough blubber. Then this hair will start to fall off, and it will be almost completely gone by the time they first enter the water with their mother.

The mating with the male she is now with will occur in either late June or July. So she will be nursing her current pup while pregnant with another. The gestation period is 8 to 11 months and by this time the pup she is caring for right now will be able to take care of itself.

The mother’s will remain on land or ice with their pups for the first couple of weeks of life. Then they are ready to move into the waters. While they instinctively know how to swim, they are taught how to move about in a way that is going to help them based on the behavior of the waters. They also start to learn how to hunt for fish even though they will continue to get their main nutrition from drinking the milk their mother produces.

The young Sea Lions are also taught by their mothers to stay away from predators. They are very vulnerable during the first six months of life. This is due to their coloring being more brown until that time. They can also be trampled on land from other Sea Lions when there is reason to be scared and a stampede starts.