The technical name for the South American Sea Lion is actually the Patagonian Sea Lion. However, you will rarely hear people or books refer to it that way. When they are full grown they will be twice the weight of the females. The males are approximately 9 feet long and weigh close to 800 pounds.

The males have a patch of short hair around their large heads that is similar to what a lion’s name starts out to be. The male’s neck is more muscled than do females.

As you can guess, this Sea Lion is found in bodies of water along the coast of South America. The main places where you will see them include Chile, Peru, Uruguay, and Argentina. They don’t stick just to the oceans though. It is common to find them in wharfs and marinas as well.

One of the behaviors of South America Sea Lions that is different from other species is how they gather. While most are very close together they do space out. It is believed the hotter temperatures in their natural habitat is the main reason why they do so. Otherwise they seem to have the same types of behaviors with socializing and vocalizing as the other species.

These Sea Lions feed on the various types of fish that are found in this area. Their main diet is anchovies and hake. They are also very fond of both squid and octopus. When these items are scarce they may consume small penguins in the area as well. They tend to hunt within five miles of the shore but they will go further out if necessary in order to fine enough food. 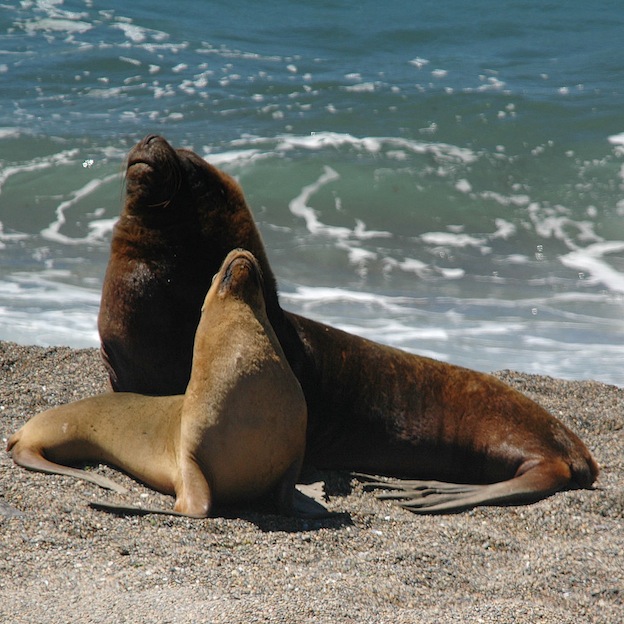 For these Sea Lions the mating process occurs from August to December. The males are very aggressive when it comes to herding females into their harems. Most of these females will already be pregnant from the last mating season. Soon after giving birth they will mate. Males that don’t have a harem of their own may band into groups and try to take over mating with females. They are also known to kill the young pups in the group due to feeling threatened by them.

In the past it seemed that all of the mating took place on the sandy beaches. However, scientists know now that they can also mate on the rocky cliffs in their habitat as well. The mothers will nurse their young for about a year because they need to get ready for the birth of the next one. The pups will stay on the land until they are about a month old. Many of them die due to the mother’s having to go into the water to get their own food.

Even though the South American Sea Lion is no longer threatened, it is still protected. There are approximately 265,000 of them today. Many groups work to ensure their natural habitat is protected. They want to address the issues of pollution in the water and global warming. These have an adverse effect on the number of South American Sea Lions. Preserving the beaches where they mate is also a major cause of such conservation efforts.

Heavy hunting of the South American Sea Lion in the last two decades resulted in the numbers dropping. This doesn’t take place very much anymore though. Those that are killed are the result of fishermen that are tired of their fishing nets being destroyed by the Sea Lions.