Steller Sea Lions are the largest of the species in the world. The males can be as long as 11 feet and weigh 2,500 pounds. The females are much smaller with a length close to 9.5 feet and they don’t weigh more than 800 pounds.

They also have a lighter color to them than the other species. Steller Sea Lions can be reddish brown or even a light tan color. You will also nice that they all have very bulky necks.

Since the Steller Sea Lions spend so much time in the water it is hard to learn about their behaviors. They do live in large groups like other species. They also use a wide range of sounds to communicate with each other.

Steller Sea Lions find a wide variety of food to consume in the water. What they will eat depends on the season and what part of their distribution area that they live in. Some of the common ones include all types of fish, various invertebrates, and even smaller Sea Lions of the same species or others if those food sources are scarce. 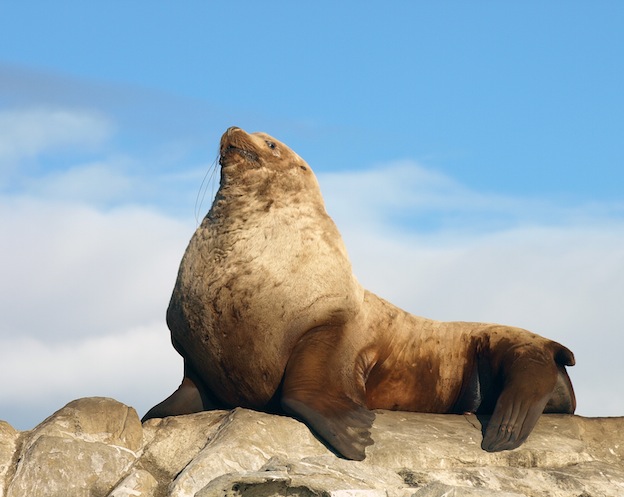 The Steller Sea Lions spends more time in the water than other species. It is believed their larger size makes it harder for them to get around on the land. They do spend time on land though during the reproduction process and to give birth to their pups. The males will stake their territory a few months before the females arrive. They don’t leave to eat during this period of time or while they are mating. A male can loose several hundred pounds during this span of time.

The pups are born from May through July and often weigh as much as 50 pounds. They can nurse for a period of one to three years. It really depends on if their mother has a new pup the next year. The females are pregnant when they enter a harem so they will give birth there. Then they will mate about 14 days later.

It is estimated there are less than 100,000 Steller Sea Lions remain today. In the past 30 years they have lost a large percentage of their population. Efforts are in place to protect them from hunters and from accidents in a hope that they will be able to survive.

Careful research also shows that a lack of food in many of their locations though has led to them dying as well. When they don’t get enough to eat they will have less blubber stored to keep them warm. Females are less likely to mate when they are stressed and not getting enough food. Many of the young can be born sick due to poor nutrition and their mother’s may not be able to produce enough milk for them to survive.

Many groups of volunteers work to rescue pups that have been abandoned or that aren’t getting fed enough. They try to keep their interaction with them to a minimum though so that they can be returned to the wild.
Even though these Sea Lions are protected, many fishermen still hunt them. This is because they are competition for the fish they wish to harvest. They also get tangled up in the nets which results in money being spent to replace them.